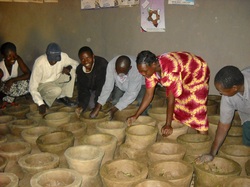 The Bungoma district of Western Kenya is 30 miles from Uganda border and near a national forest.  Villagers living in the area are mainly farmers who rely on annual rains for all irrigation so water becomes crucial during the dry season.  For cooking, they use a traditional 3 stone open fire, requiring a great deal of firewood and creating a lot of smoke.  When Salim Mayeki Shaban of ACON started investigating fuel use in Bungoma, he found that the population was getting its firewood from primary forests. The high fuel demand was quickly deforesting the area and some villagers had been taking wood illegally from the national forest.  To alleviate the pressure on the forest, ACON designed a project that would work with local villagers to promote energy conservation and reduce deforestation through the use of improved cooking stoves, designing biochar producing stoves, training local farmers on application and utilization of biochar, and making fuel briquettes from water hyacinth and other biomass materials (not from the forest).

Salim did not have a great amount of financial or informational resources for his work, so turned to the internet for a simple stove design that his group could make onsite to reduce fuel wood consumption.  Using plans found online and a stove model from Uganda, he designed a “clay” stove—which is actually clay mixed with anthills to create a cement for the stoves and mixed in chopped straw (for insulation).  After testing and reconfiguring, his group created a stove that reduced fuel wood consumption by 50% and created less smoke.  Salim estimates that from 2004 – 2009, their group built over 10,000 improved stoves.

To fund this work, ACON decided to sell the stoves to the villagers.  The stoves were marketed as a money saving device that would pay for itself in just months due to the reduction in firewood costs.  Initially, villagers were much more interested in purchasing a stove that was metal as they felt it would last longer and operate better.  Salim and his team started to add metal stoves (imported) to their inventory, but also had village competitions between the stoves such as a water boiling test and kitchen performance test so villagers could decide which model would work best for them.

With the introduction of the biochar farming, demand rose for stoves that on top of being more efficient and healthy, could also produce biochar. After some research and testing different types of stoves ACON decided to use a design found on the internet for a Top Lit Updraft  (TLUD) stove. For more information on these stoves click here.