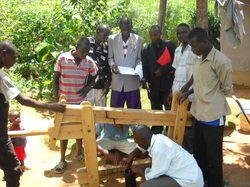 The manual briquetting press
The use of fuel briquettes made of agricultural waste or other biomass form is a sustainable alternative to firewood as a fuel for cooking. ACON has therefore been producing briquettes from straw and leaves for some years. We have build a manual briquetting machine which is capable of producing up to 200 briquettes a day. We have been selling these briquettes to community members as a way of earning some income to support our other projects.

The briquettes are made of mixture with waste papers as binding agent. The briquettes are pressed manually and then laid in out to dry in the sun. We have recently acquired two electrical briquetting machines capable of producing a large amount of briquettes. A soon as the project site wil be connected to the grid for power we will start large scale production of briquette from agricultural waste and Typha. The briquettes can also be used in our stoves and thus to produce biochar.

Harvesting Typha, the next step 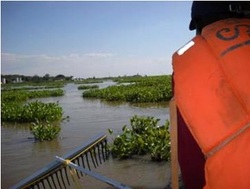 Harvesting Typha
Lake Victoria has seen increasing coverage by Typha or Water Hyacinth over the last years. As well as being a threat to the environment this wild growing weed is also a thread to the lake based economy as it hinders boats and ferries. But Typha can be harvested and used as a biomass fuel and thus helping two problems at the same time.
In the past five years, ACON has acknowledged the aforementioned challenges and has been seeking for a sustainable solution to the problem. We have been more interested in developing a more refined and innovative formula to simplify and make these complex issues relevant to individuals and empower them to become part of the solution. The Typha harvesting and briquettes making process has produced promising results.  We are in the process of partnering with other friends / organizations to enter into unique public-private partnerships that focus on commercial marketing of Briquettes and Biochar produced from Typha. We anticipate that when fully operational will encourage individuals in the conservation behaviors and to take relatively simple actions on behalf of society to protect the environment.