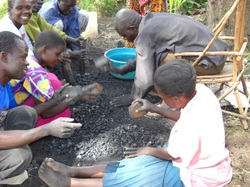 Preparing the charcoal for use in the field
Villagers in the region of Bungoma practice subsistence farming and depend on fertilizers for their crops.  Additionally, they have had recurring serious droughts and Salim wanted to see if using biochar could help with water and nutrient retention in the soil.

Salim contacted Wayne Johnson and Rob Lavoie of AirTerra in Canada about using biochar.  They had ongoing discussions for 8 months over email and the phone and before Wayne and Rob went to the project area for 2 weeks in 2009 to work with Salim.

Rob and Wayne spent 2 weeks with the group and helped set up a series of test plots to see how the biochar worked in the soil.  Salim’s stoves are not biochar-producing stoves so the group made biochar by buying wood charcoal from the marketplace which was then crushed into small pieces.  They created nine test plots varying from Kenyan soil alone to soil plus biochar to soil plus biochar plus manure plus urine.  Biochar was added at a rate of 15% of overall soil mass.  Using a moisture meter, they found that soil moisture in pure Kenyan soil (without biochar) was tested at level “2”—dry; while the soil with biochar was level “9”—wet.  The project also tested the moisture at the root level of various crops (maize, yams, sweet potatoes and squash) and found similar results between the un-amended soils and the biochar-amended soils.  Plant growth was also larger.  This was tested by comparing the growth of plants in each of the test plots on a weekly basis and then weighing the final yield after harvest. 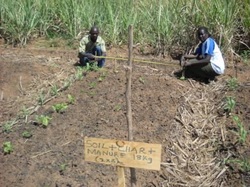 Setting up testplots
Salim found that the increased yield on farms that is was worth the cost of buying charcoal on the marketplace, crushing it and adding it to plots.  One issue with charcoal purchased in the marketplace is that it may not be sustainable.  The project team is working on creating stoves that use less wood (and could also burn agricultural waste) and at the same time, create biochar.

One important aspect of this work is training local villagers on using biochar in the fields.  Since the first results of the field trials in 2009, ACON has been carrying out community training on the application and utilization of biochar and the importance of biochar in soil.  Participants in a training group learn about biochar and set up field trials over the course of four days and then are given biochar to take home with them.  The project goal for 2010 was to train 1,000 local farmers in area villages using the training module developed and improved upon during the initial trainings. The use of biochar in the field is now wide spread among the farmers and the results are very satisfying as farmers have turned from chemical fertilizers to biochar  in combination with manure and urine as fertilizers.

Biochar - What is it?

Biochar is agricultural charcoal. Biochar is produced through pyrolysis - heating biomass including agricultural waste under suppressed oxygen conditions. Pyrolysis fixes existing carbon in the biomass, resulting in a stable carbon structure which will take hundreds to thousands of years to biodegrade.

Biochar has two significant potential positive effects for the farmer. 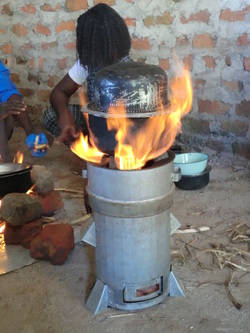 Our biochar producing stove in action
With the success of the biochar in the field. ACON started looking for a way to make biochar efficiently and cheaply. The solution, at least for small scale production, was found in biochar producing stoves. After some research and testing we decided to use a design found on the internet for a Top Lit Updraft (TLUD) stove. This stove is actually a gasifier which transforms the firewood into charcoal while the flue gases are burned and produce heat to cook. The gases produced in the gasification process are burned in the top compartment and thus the stove doesn't produce any smoke once it is running steadily. For this reason this is a very efficient and clean stove on top of producing biochar.

As part of this project ACON is training community members to make these stoves so that they can be introduced throughout the region. About 10 trainees fro different communities are currently following a course of several months to teach everything they need to know about the stoves and how to make them. This project is being organised at the main project site were we have installed a workshop.